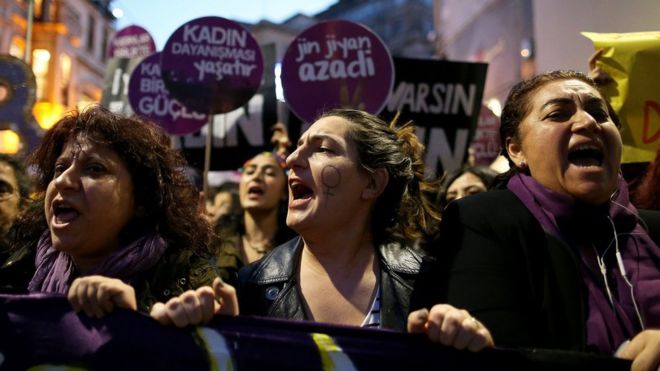 Turkey’s main opposition party has called for a parliamentary inquiry after the directorate of religious affairs said that, under Islamic law, girls as young as nine could marry.

The comments by the Diyanet prompted an outpouring of anger on social media from Turkish women’s groups.

The directorate insisted it was only defining points of Islamic law.

Turkey’s legal age of marriage is 18 but the practice of underage weddings in religious ceremonies is widespread.

Turkish law also allows 17-year-olds to marry with the consent of their parents or guardian, or 16-year-olds in exceptional circumstances with court approval.

The current outcry was started by a statement on adolescence posted online by the Diyanet, the state body which administers religious institutions and education.

Thirty MPs of the main opposition Republican People’s Party (CHP) called on the government to launch an investigation into child marriage.

In a later statement, the Diyanet said it was only defining Islamic law and that it did not approve of early marriages.

“Forcing a young girl to marry someone before they obtain the psychological and biological maturity, and before they gain the responsibility to make a family and become a mother, would not comply with Islam which puts consent and will as a condition in a marriage,” it said.

“Our directorate has never approved early marriages in the past, and it never will.”

Correspondents say that, despite the directorate’s assurances, distrust of the body still remains among secular groups.

In 2016 the government withdrew a bill that pardoned men convicted of sex with underage girls if they had married them.

Critics said it would legitimise statutory rape and encourage the practice of taking child brides.

The bill had sparked street protests across Turkey and was condemned abroad.