A resourceful pickpocket managed to steal 53 smartphones at a concert in Birmingham, England, by using a very unusual accessory – a women’s swimming suit. This allowed him to conceal all the stolen phones as he tried to get his hands on even more.

Romanian national Alin Marin, 22, attended a Royal Blood concert at Arena Birmingham on 18 November wearing the black and pink compression suit and a pair of skinny jeans. He made his way to the mosh pit where he was able to relieve dozens of revelers of their phones without them noticing. The pickpocket would stash each of them inside the swimsuit, and move on to the next target. He was kind of like a living, breathing deposit box. At one point, he had 53 phones stashed close to his body.

Unfortunately for Marin, Birmingham police were also mingling with the crowd, as part of a covert operation prompted by intelligence regarding thefts targeting the band’s fans at concerts earlier in the year. They arrested Marin on Broad Street shortly after he left the gig, and recovered the phones from a nearby car park.

“This was organized pickpocketing. Marin went equipped to steal phones and took advantage of revelers enjoying themselves in the standing area,” Birmingham city center Police Sergeant Julia Slater from West Midlands Police said. “Many of the phones were taken from front jeans pockets, which people believe is a safer place to carry valuables, but due to the jostling in the mosh pit, they simply didn’t realize they’d been targeted. He slipped phones inside the swimsuit and effectively turned himself into a deposit box for the phones, allowing him to carry tens of phones concealed around his body.

Birmingham Crown Court charged Marin with theft on Monday 18 December, and he will serve a three-year sentence in jail. 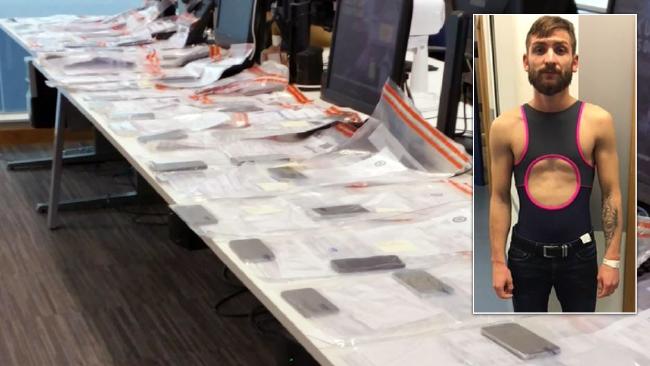