A mother of two has been left with a hole in her face after dismissing skin cancer as a “stubborn” blemish.

Keely Jones was advised to see a dermatologist after her beautician noticed the red blemish on her face, but she ignored her concerns. The 40-year-old North Carolina native was convinced that the bump on her temple was just a spot, as she’d rarely exposed her skin to the sun.

“I thought it was just a stubborn one, so I just continued to pick it, and every time, it would just scab over and bleed,” Jones said. “After seeing the dermatologist, they decided to do a biopsy on my temple, as it looked concerning. A week later, I received a call and was told that I had cancer.”

Jones was diagnosed with basal cell carcinoma, a skin cancer that can cause extreme disfigurement if left untreated, two months ago.

The growth, which left Jones with a hole the size of a nickel on her forehead, was removed and required over 20 stitches to close.

“Skin cancer can happen to anyone — I hardly used tanning beds, and always avoided the sun, and I still managed to end up with skin cancer.”

She said that even though the spot was so small, “I had to have removals three times to make sure all of the cancer was gone.”She is now using her story to raise the awareness of others. “For the next few weeks, I can’t exercise, pick up the children, or sleep on my righthand side.” 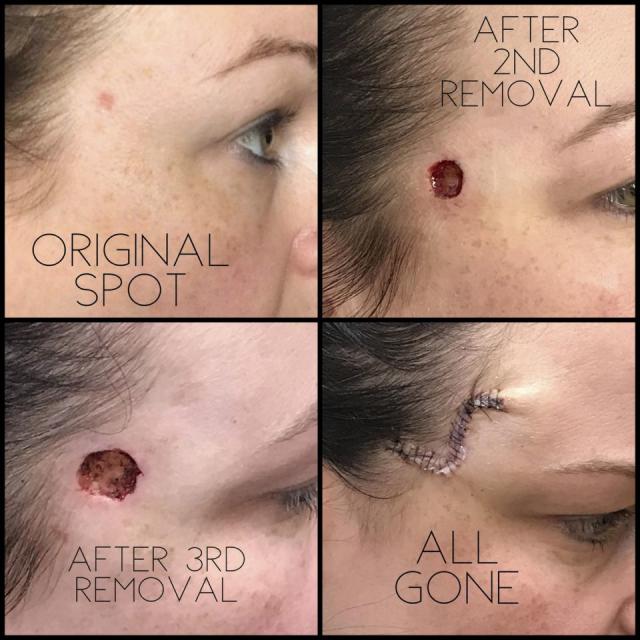