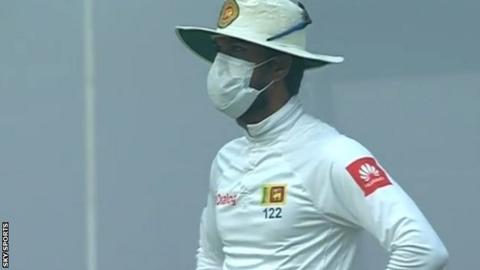 The Indian capital has been plagued by the problem for several weeks.

Sri Lanka had just 10 men on the pitch at one point, despite several players wearing masks, with Lahiru Gamage and fellow bowler Suranga Lakmal leaving the field during the afternoon session.

India declared their first innings on 536-7, with captain Virat Kohli scoring a career-best 243.

The 29-year-old became the first international captain to score six double centuries, all of them coming in the last 17 months, but the smog prompted him to declare with Sri Lanka players complaining about the conditions and play stopped on three occasions.

On one occasion the umpires consulted doctors and physiotherapists before resuming.

India coach Ravi Shastri and Sri Lanka counterpart Nic Pothas also came on to the field to speak to umpires.

India lead the series 1-0 and need only a draw for a record-equalling ninth successive Test series triumph. England and Australia are the other sides to have achieved the feat.