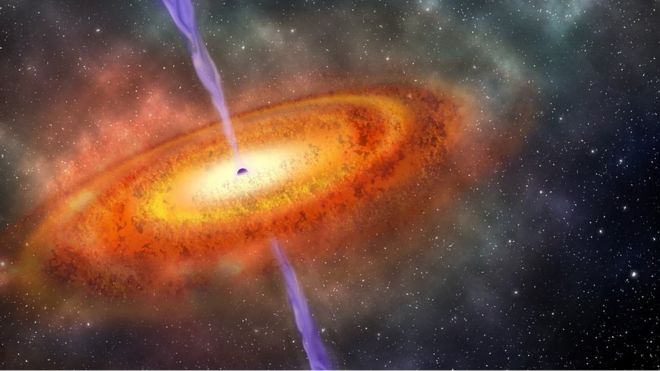 Astronomers have discovered the most distant “supermassive” black hole known to science.

The matter-munching sinkhole is a whopping 13 billion light-years away, so far that we see it as it was a mere 690 million years after the Big Bang.

But at about 800 million times the mass of our Sun, it managed to grow to a surprisingly large size such a short time after the origin of the Universe.

The find is described in the journal Nature.

This relic from the early Universe is busily devouring material at the centre of a galaxy – marking it out as a so-called quasar.

Matter, such as gas, falling onto the black hole will form an ultra-hot mass of material around it known as an accretion disk.

“Quasars are among the brightest and most distant known celestial objects and are crucial to understanding the early Universe,” said co-author Bram Venemans of the Max Planck Institute for Astronomy in Germany.

This quasar is interesting because it comes from a time when the Universe was just 5% of its current age.

At this time, the cosmos was beginning to emerge from a period known as the dark ages – just before the first stars appeared.

The newly discovered black hole has a redshift of 7.54. The higher the redshift, the greater the distance, and the farther back astronomers are looking in time when they observe the object.

Prior to this discovery, the record-holder for the furthest known quasar existed when the Universe was about 800 million years old.

“Despite extensive searches, it took more than half a decade to catch a glimpse of something this far back in the history of the Universe,” said Dr Bañados.

The discovery of a massive black hole so early on may provide key clues on conditions that abounded when the Universe was young.

“This finding shows that a process obviously existed in the early Universe to make this monster,” Dr Bañados explained.