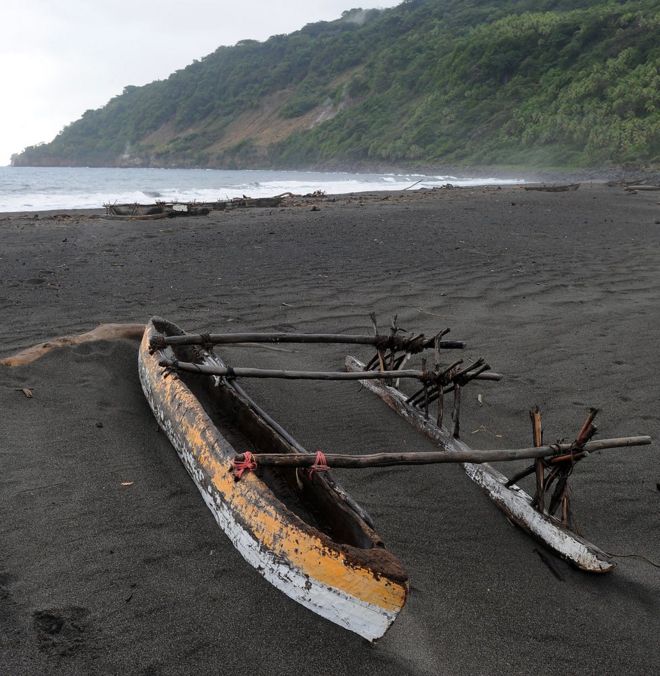 A study of ancient DNA has shed light on the epic journeys that led to the settlement of the Pacific by humans.

The region was one of the last on Earth to be permanently settled by humans who used canoes to traverse hundreds of miles of open ocean.

Two different studies tracked changes over time in the genetic make-up of people inhabiting Vanuatu – regarded as a gateway to the rest of the Pacific.

The work appears in Nature Ecology & Evolution and Current Biology.

Prof David Reich, from Harvard Medical School, said the region had a “tremendous” range of human diversity, adding that Vanuatu itself had an “extraordinary diversity of languages” in a relatively small area. The number of languages spoken in the tiny island state is thought to number more than 130, though several are endangered with just a small number of speakers.

Prof Reich, who is lead author of the study in Current Biology, added that Vanuatu was a “gateway to the remote Pacific islands… through that region of Vanuatu and neighbouring islands, people spread all over the Pacific”.

The first people to arrive in the islands belonged to the Lapita culture, who expanded out of Taiwan between 5,000 and 6,000 years ago, reaching Vanuatu about 3,000 years ago. “They were really talented seafaring people,” said Dr Cosimo Posth, from the Max Planck Institute for the Science of Human History in Jena, Germany. Dr Posth was co-author of the study in Nature Ecology & Evolution.

Their secret was the specialised outrigger canoe, which is characterised by the addition of lateral support floats which stabilise the main hull. This innovation, says Dr Posth, “allowed them to cover immense distances of the ocean”.

The Lapita voyages represent the most extensive dispersal of agricultural people in history. They carried farming technology and languages belonging to the Austronesian family as far west as Madagascar and as far east as Rapa Nui (Easter Island).

But modern people in the wider region have varying amounts of ancestry from “Papuan” populations like those that live today on New Guinea, and other islands in the Bismarck Archipelago such as the Solomons, New Britain and New Ireland.

However, when exactly this ancestry spread across the region has been hotly debated. One idea was that the Lapita mixed with people speaking Papuan languages early in their voyages, spreading both types of ancestry throughout the region. Alternatively, it could be explained by more recent seafaring expansions by people from the Bismarck Archipelago.

DNA from burials on Vanuatu dating from between 2,900 and 150 years ago show that the first Lapita people were genetically similar to present-day populations such as the Ami who live in Taiwan.

“The first people of these remote pacific islands had none of the Papuan ancestry from the New Guinea region that is ubiquitous today and everyone has about 25% of it,” said Prof Reich.

That means that ancestry from the south must have arrived in the region more recently. Indeed, by studying the DNA of the Vanuatu population through time, the researchers found that people bearing Papuan-like ancestry arrived in the islands around 2,600 years ago. An influx of – mostly male – newcomers steadily transformed the genetic make-up of the island.

Intriguingly, all of this happened without a replacement in the language. The people of Vanuatu today speak Austronesian languages like those presumably spoken by the Lapita. This may be because a “lingua franca” developed in the region among seafaring, mobile people voyaging and trading across long distances.

Other peoples of the Pacific, such as people living in Polynesia, derive their Papuan ancestry from a different source to the one that populated Vanuatu.

“What we’re detecting is not one, but at least two movements of Papuan ancestry out into the Pacific,” said Prof Reich. These other movements remain a focus for future studies.

Dr Posth commented: “All the islands in eastern Polynesia – from the Cook Islands to Hawaii, New Zealand, French Polynesia – were settled much later, about 1500 years after the Lapita expansion. So there must have been further technological advancements [to the initial outrigger canoe design] that allowed people to spread even further east.”