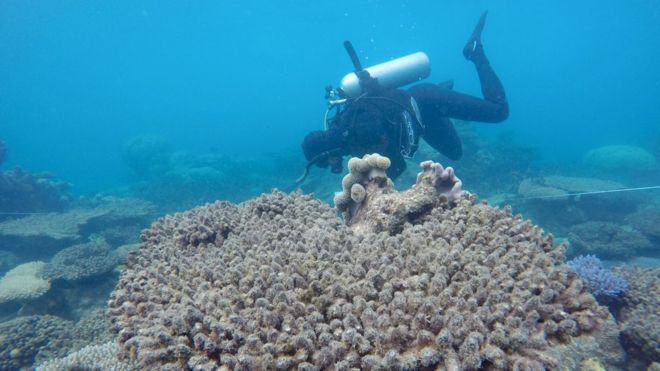 Repeat bouts of warmer seawater are posing a significant challenge to the world’s tropical corals.

A study of 100 reefs, published in Science Magazine, shows the interval between bleaching events in recent decades has shortened dramatically.

It has gone from once every 25-30 years in the early 1980s to an average of just once every six years today.

Bleaching is caused by anomalously warm water, which prompts coral polyps to eject their symbiotic algae.

This drains the corals of their colour and is fatal unless conditions are reversed in a reasonably short time.

But even if temperatures fall back quickly, it can still take many years for damaged reefs to fully recover.

“The acceleration in the return rate of bleaching events matches up very well with what the climate models have been telling us – that predict that by mid-century most of the world’s coral reefs will be suffering yearly, or near yearly, heat stress,” he told BBC News.

One telling observation in the assessment is that as global warming has progressed – the “cold” phases in the famous La Niña-El Niño ocean oscillation have today become warmer than the “hot” phases were three decades ago.

“There basically are no cool years anymore; they are just years that aren’t too hot,” said Dr Eakin.

Aside from their beauty, tropical corals provide important ecosystem services upon which the livelihoods of many millions of people depend.

Reefs, for example, afford coastal protection from big waves, storms, and floods; they also act as key spawning and nursery grounds for economically important fish and other aquatic species.This study concentrates on the climate challenge to corals, but many reefs are also experiencing other stresses, including pollution, over fishing and habitat destruction.

But it is interesting to note how more radical conservation solutions are now increasingly being discussed.

These touch on topics such as engineered super-corals that are better able to cope in very warm water, and how you might go about artificially cooling a reef at times of high stress.