She was twice divorced and had brushes with the law — was shrouded in secrecy.
She was the mother of four sons — she gave birth to the first at 15 and the second at 17, according to a 1995 Ebony magazine profile. The article depicted her as a warm, down-to-earth woman with a crackling sense of humor, who answered the door in bare feet and confided her diet secret was a combination of Slim-Fast and younger men. She also was reportedly an accomplished cook, telling Ebony, “I can wear some chitlins out.”
The Ebony profile suggested the source of some of that pain might have been Franklin’s growing up largely without a mother — Barbara Franklin left the family in 1948, when Franklin was 6, and died four years later — or the anguish of losing her father.
C.L. Franklin was shot in his home by burglars in 1979 and lived for five years in a semi-coma before dying, the magazine said. Asked the toughest decision she ever had to make, Franklin told Ebony, “It was when my dad was in the hospital,” and began to cry.
She was also the godmother of Whitney Houston, who died in 2012.
But Franklin’s lows and the emotion involved fueled her music. She saw a number of resurgences in the past three decades and her image as a pop icon endured, with President Barack Obama featuring her singing “My Country ‘Tis of Thee” at his inauguration in 2009. She also performed at President Bill Clinton’s inauguration in 1992.
Franklin was awarded the Presidential Medal of Freedom by President George W. Bush in 2005. In 1986, her voice was declared a national resource by the Michigan Legislature. She even had an asteroid named for her.
Franklin battled health issues in recent years, struggling with weight gain and associated ailments.
In August 2010, she canceled two free concerts in New York because of “fractured ribs and pain in the abdomen,” spokeswoman Gwendolyn Quinn said, adding that Franklin’s doctors had told her to come in for tests immediately.
That November, her doctors ordered her to cancel all personal appearances for the next six months, the Detroit Free Press reported. In early December, Franklin underwent surgery deemed “highly successful.”
She also canceled some appearances in 2013.
However, she recovered enough to return to touring in 2014, including a performance at New York’s Radio City Music Hall. She’d also lost almost 100 pounds.
“It’s fun buying new clothes!” she told USA Today. “I couldn’t stay out of the mirror, just turning every way. This is my natural weight.” 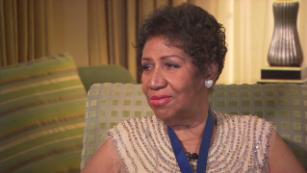 See all posts by Michael Faga